Home/All/SkinTrack: The future of mobile interfaces

SkinTrack: The future of mobile interfaces 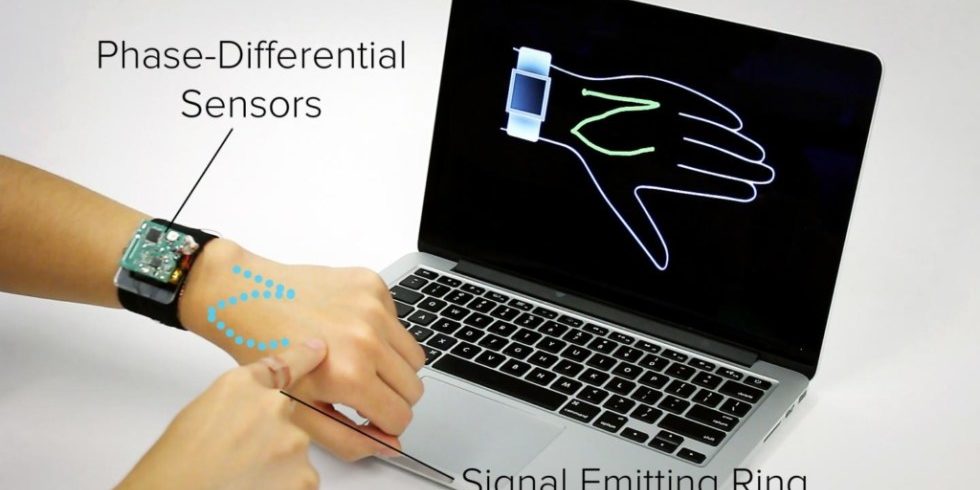 From wearable, flexible electronics for the skin, to implanting electronics into your skin. Modern technology has begun to reshape how we interact with our “smart” electronics. The new wearable technology, developed by the Human Computer Institute’s Future Interfaces Group at Carnegie Mellon University, seeks to completely re-define the term of wearable skin electronics and usher in a new age of interfaces.

This discovery takes wearable electronics to the next level by creating a smartphone interface on your arm. With the advent of the smartwatch, many of those in the technology field have been on the look out for ways to expand interactions beyond the restricted space of the small smartphone screen.

The technology, dubbed “Skin-Track”, allows for continuous touch tracking on the hands and arms. It also has the ability to detect touches at discrete locations on the skin, enabling functionality akin to those of buttons or slider controls. Previous iterations of skin to screen systems have often looked at using flexible overlays(like the Flexi-Skin developed at Tokyo’s Graduate School of Engineering), interactive textiles and even projector/camera combinations. Often these can be quite cumbersome and restrictive.

The beauty of the Skin-Track by comparison is that users are only required to wear a signal emitting ring along with their smart watch. The ring propagates a low energy, high-frequency signal through the skin when the finger touches or nears the skin’s surface. The skin track is not obtrusive making it assimilate easily and effectively into our array of everyday worn items i.e.: watches and rings.

“A major problem with smartwatches and other digital jewellery is that their screens are so tiny,” said Gierad Laput, a Ph.D. student in HCII and part of the research team. “Not only is the interaction area small, but your finger actually blocks much of the screen when you’re using it. Input tends to be pretty basic, confined to a few buttons or some directional swipes.”

“SkinTrack makes it possible to move interactions from the screen onto the arm, providing a much larger interface,” said Chris Harrison, assistant professor in the HCII and adviser to the research. The user wears a ring that produces a high-frequency electrical signal. When the finger gets near to the skin or touches the skin, that signal propagates through the skin.

The applications for Skin-Track can even be experienced in the gaming world. The researchers found that it can also be used as a game controller to scroll through lists on the smartphone, zoom in and out and even to draw. Even using your skin as a dialing pad can be achieved with Skin-Track. The technology also has hot key functions like drawing “N” for opening up your news application or “S” to silence your phone. Doodling during meetings has just become even easier.

However like with most technology of this nature there are some limitations. One of the biggest is keeping the signal emitting ring powered up. Signals tend to change as the device is worn for prolonged periods of time. This is due to factors like sweat and hydration and the constant motion of the human body. Despite all of that, the technology is safe and there is no evidence indicating the contrary, even with the radio frequency signals used by Skin-Track, there are no signs that it has negative health effects.